Varroa continues to devastate colonies, and the issue seems to worsen as the years pass. For example, colonies with 5 mites per 100 bees in the spring would live 10 years ago, but now colonies seem to need to have < 1 mite/ 100 bees to survive. This is because of viruses. Mites transmit not only more viruses, but the viruses have become more virulent over time, such as Deformed Wing Virus. Researchers are finding new variants of Deformed Wing Virus that are more devastating, but Deformed Wing Virus phenomenon is likely just the beginning. As mites transmit more and different viruses, the mite issue will worsen.  As mite issues worsen, more and more control is needed.

Beekeepers use many different forms of varroa treatment, and it really depends upon the “type” of beekeeper. Most commercial beekeepers use synthetic treatments such as amitraz, whereas hobbyists typically use organic treatments such as apiguard, formic acid and oxalic acid. While these treatments can be effective when used properly, they all have certain limitations. For example, apiguard and formic acid have temperature limitations, while mites can develop resistance to amitraz. As of now, there is not a perfect treatment. Each treatment has its time and place, however, “perfect” time rarely occurs. This is why many commercial beekeepers have struggled, and have accrued high annual losses. Think about it this way. Hobbyists can monitor and treat accordingly, whereas commercial beekeeper must treat their entire operation without knowing where their numbers lie. If a colony has high numbers after the treatment, then that colony is effectively dead. Beekeepers do not have time to manage each colony, so they must account for these “mite bombs” in their operation. Most treatments only work perfectly if the weather is warm or humid enough, the colony is a genetic predisposition against mites, and if the treatment is applied correctly. These are limitations that impact beekeepers because: A) they must constantly train new crew members, B)they often have a short window to treat due to migration, and C) they must treat 2000-20000 colonies. Because many treatments have limitations, these mite bombs can be scattered throughout the operation. This leads to “typical” 20-30% annual losses, even if the beekeeper does treat. This is why a new treatment option would help, and why I was excited to hear about lithium chloride.

Nature recently published a paper from researchers in the University of Hohenheim in Germany about Lithium Chloride, a possible new mite treatment. As I read about Lithium Chloride, I was left excited, yet curious about further experimental trials. Lithium chloride is new and exciting, especially because new varroacides are not produced regularly. I sample >30 commercial beekeepers annually, and they struggle with mite controls and which treatments. They often use amitraz, the main ingredient of apivar, which most beekeeper view as a “ticking time bomb” because beekeepers believe resistance is inevitable. Most commercial beekeeper experience 70-90% losses in the early to mid 2000’s because mites became resistant to coumaphos and fluvalinate, two major mite treatments at the time. This includes the commercial beekeeper I worked for whom lost 80% of his colonies in 2006 when mites became resistant to coumaphos. If lithium chloride has realistic potential, then beekeepers have an option IF mite become resistance to amitraz, the current #1 treatment for mites among commercial beekeepers. 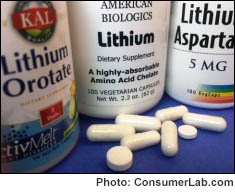 Does lithium chloride have potential? Sure. I would be ignorant if I said it may have potential. I mean, they clearly showed that feeding Lithium chloride to bees: A) kills mites and B) does not hurt bees. I cannot deny the results. However, they must be taken with a grain of salt for a few reasons:

I do not mean to bash lithium chloride because it has a lot of possibilities. Lithium chloride is easy to apply, most likely does not leave residues in honey or wax, and may kill >90% of mites, so I am all for Lithium chloride. But let us wait and see, because we have seen miticides like this before. Like the researchers said, lithium chloride provies a “promising basis for the development of an effective and easy-to-apply control method for mite treatment”. I sure hope so!